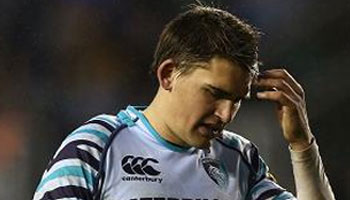 Leicester Tigers flyhalf Toby Flood faces a possible suspension that will rule him out of the Ospreys Heineken Cup clash this coming weekend. His Six Nations campaign could also be threatened, but Richard Cockerill believes there was nothing in it.

Flood was cited for a dangerous tackle on Worcester’s Andy Goode during the Tigers’ 19-14 Aviva Premiership match win on Friday night.

He will attend a disciplinary hearing in London tomorrow and looks likely to face a ban that could possibly tarnish his chances of reclaiming the England number ten jersey.

Cockerill feels that there was no malice in the tackle though, and they simply fell clumsily.

“I think it was a genuine attempt at a good-quality tackle,” said Cockerill.

“Clearly, Andy Goode ended up in an awkward position. But with Rob Hawkins joining the tackle and pulling Andy to the ground with his collar, it made it look worse than it was.

“If you take the views of the commentators out of the way and look at it in the cold light of day, it was just unfortunate. It is not a tip-tackle or a spear tackle.

“It was just a tackle which left Andy in an awkward position. There was no malice. Toby Flood is not that type of player,” he added.