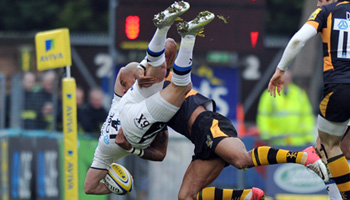 This is the tackle that many are saying was very similar to what Toby Flood has been cited for, as shown in the previous post. In this instance Tom Varndell was yellow carded, while Flood was cited and will more than likely be suspended.

As you can see by Varndell’s reaction, the decision by the officials came as a bit of a surprise.

Later in the game referee Andrew Small sent Bath’s Dom Day to the sin-bin for a tackling a player in the air, a call that some felt had a lot to do with the earlier decision.

The tip-tackle law is fast becoming a massive irritation for players and fans alike, but it’s not necessarily the referees that are at fault. The laws need looking at, as time and time again we see players harshly sent from the field in a sport that is revered for it’s physicality.

The counter argument would be that while many tackles these days are being unfairly penalised, the aim is to minimise the chances of one occuring that could ultimately be life changing.

All fans want though is consistency, something that for whatever reason isn’t happening.

Opinions on this topic will always vary. Feel free to share yours below.

Does an upcoming Rugby match take your fancy and you would like to place a bet on the game? Head to coral betting to check out their fantastic odds today!