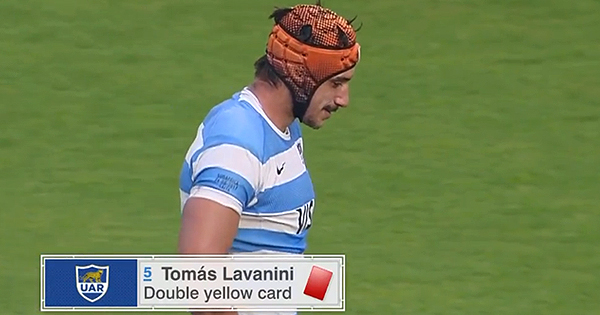 Giant Argentina lock Tomas Lavanini will be free to play in the next round of the Rugby Championship after a SANZAAR Foul Play Review Committee accepted his guilty plea after he received two yellow cards against South Africa on Saturday.

The 2.01m second-rower has a growing reputation as being a physical presence, as seen again in Salta. This time he was first yellow carded for what is often called a grass cutter tackle, when no arms are used and a player dives into the ball carrier’s shins.

Despite Lavanini appearing to make a slight effort with his left arm, the referee and TMO eventually decided that yellow was correct. A deliberate slap down later in the game meant that a second yellow card resulted in a sending off.

“With respect to sanction the Foul Play Review Committee ruled, after considering a number of factors, including the fact that the second Yellow Card was not for a foul play offence, the effect of the Red Card both on the match and on the Player’s team, and the Player being off the field for a total of some 35 minutes, that the Player’s ordering off was sufficient in itself and that no further sanction was appropriate in these particular circumstances. The player is therefore free to play and will serve no additional suspension”

The dangerous tackle can be seen here.

With South Africa almost certain to score a try with an overlap out wide, this deliberate slapdown was seen as a professional foul, giving the referee little option but to show yellow, and then red.