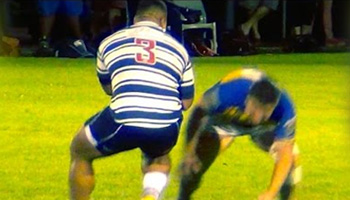 You may remember that a year ago a New Zealand schoolboy prop, weighing 135kg’s, went viral after he scored a sensational hat-trick, showing off some incredible pace and power. He is now playing for Brothers Rugby Club in Australia, and set up a try with some nice play.

About 7 months back it was announced that Queensland Reds had signed him. Since then we haven’t heard too much, but this latest video shows that a year on, he still posesses the same power and natural ability, albeit at a higher level of the game.

The footage doesn’t have any other angles as it wasn’t a televised match, but from the little we can see, he is certainly one to look out for at a higher level in the not too distant future.

Note: See another angle of this try in the latest Wraparound here

credit: thanks to Ben ‘Waterboy’ for sending this in