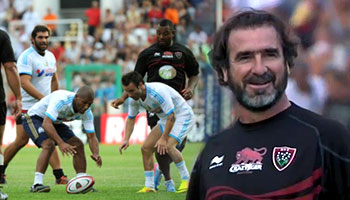 A crazy game took place in France earlier in the week as Toulon hosted football club Olympique Marseille for a half football-half rugby match in aid of charity. Eric Cantona was on hand to ref and play as things got a bit strange in the second half.

Stade Mayol played host to this charity game with a difference, as the first half was played as football with goal posts in place, and then for the second half things switched as rugby posts were erected. The game was in aid of a local cancer charity, and had 12 000 fans in attendance.

That was the plan, but with rolling subs to give everyone a chance to play, soon players weren’t leaving the field after being subbed, and at one stage it was 15 vs 11. Staff also took to the field, and teams became mixed. Toulon players wore Marseille shirts, and vice versa.

We saw some great goalkeeping from Chris Masoe and Steffon Armitage in the first half, as well as two well taken goals from brother Delon, who looked a natural out there.

In the second half it was time for rugby as the Marseille players got into the spirit of things, despite numerous forward passes and tries scored from in front of the kicker. Still, everyone had fun, including Manchester United legend Cantona, who stepped up for a conversion.

The 47-year-old, who retired from football in 1997, reportedly said to hat-trick tryscorer André-Pierre Gignac that he was going to try to hit the cross bar. And he did.

You can see that in the second part of the video, which is on page two and features the rugby half.

The first half, with football, is below and includes some subtitles for some of the commentary, including a great moment when Masoe picked up the ball and ran with it, as the commentator said: “They say rugby was born this way.”

Marseille edged the hosts 5-4 in the first half, taking a 36-35 overall victory on a memorable day.

The rugby half, where both sides were mixed and it was generally chaotic, but lots of fun for those that played and attended. Marseille physio Christophe Maouvrier scored the late equalising try.