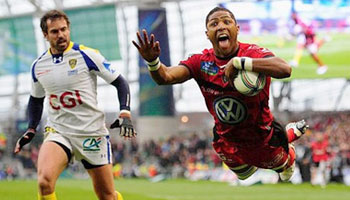 Following Toulon’s victory over Clermont in the Heineken Cup Final, scorer of the decisive try, Delon Armitage, has admitted that his show-boating was uncalled for. Today we look at the highlights, and have the full match replay for those who missed it.

Clermont scored two tries and looked to be in control before fullback Armitage gratefully snatched a chance down the left wing after a turnover steal by Juan Martin Fernandez-Lobbe.

Jonny Wilkinson kicked three penalties and the conversion as Toulon came back from 15-6 down to take the win. Wilkinson didn’t miss a kick in the final, semi final, and quarter finals, totalling 56 points in the three matches. He has since been named European Player of the Year 2013.

“To receive an award of this importance towards the end of my career is really special. I feel privileged to have been nominated,” said Wilkinson upon receiving the award.

The other contenders were Julien Bonnaire, Wesley Fofana, Jamie Heaslip, and Sitiveni Sivivatu.

Backs coach Alex King has said that Lions coach Warren Gatland should ‘take him tomorrow’. “He is a match-winner. You’ve seen that today. You’ve seen it through his whole career. If the Lions want to win the series you’ve got to have players like that in the squad,” said King of Wilkinson.

Tryscorer Armitage, who waved cheekily to Brock James, admitted it wasn’t a smart thing to do. “It was stupid celebrating before, but I was just so happy to score in a Heineken Cup final.

“It was a dream come true. I knew straight away that I was going to score. There was no one in front,” he said, before reflecting on the achievement and his move to France.

“Coming to Toulon, you do have doubts in your mind, wondering if you have done the right thing, leaving London Irish, not being able to play for England, but to win the Heineken Cup in my first season has got to rank right at the top in terms of achievements,” said the 29-year-old.

Below are quick highlights from the match. You can view the full match replay here