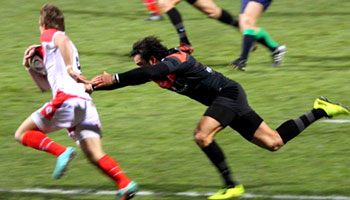 Toulouse sit in second place on the Top 14 table following their entertaining 19-14 victory over Biarritz at the Stade Ernest Wallon on Friday night. It came at a cost though as France winger Vincent Clerc hobbled off with a thigh injury.

This was probably the game of the weekend in France so we’ve got highlights featured here, but have also archived some of the other big games, where you can see the best moments from Bayonne vs Castres, Bordeaux vs Racing Metro, and Perpignan vs Clermont.

Biarritz came close to challenging Toulouse’s unbeaten home record, in the process becoming the first side to pick up a losing bonus point there this season. If it weren’t for a knock-on by Welsh wing Aled Brew as he crossed the tryline, things may have been different.

As it was Toulouse held on for the win but as you’ll see, they lost Vincent Clerc to injury, which could have larger ramifications as France start their Six Nations campaign this coming weekend.

Clerc pulled a muscle in the second half, and despite his best effort to clear the ball, Biarritz almost took advantage as Harinordoquy threw a NFL type pass infield, only to have the try disallowed.

France kick off their tournament with a match against Italy in Rome this Sunday, 3 February.