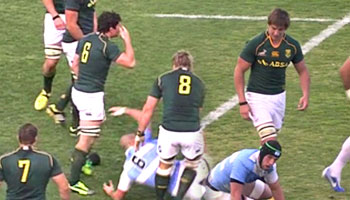 Two Argentina forwards are facing possible suspensions following the ill-tempered Pumas vs Springboks game in Mendoza at the weekend. Leonardo Senatore and Pablo Matera have been cited for biting and eye-gouging respectively.

The Springboks won the game 22-17 but it was Argentina that led for a large part and took it to the visitors physically, not standing back to a forward pack that is renowned for bullying the opposition.

Shortly after the halftime break things got a little ugly though, as Bath flanker Francois Louw claimed that he had felt Matera’s fingers around his eye.

“He’s eye-gouging me!” could be heard over referee Steve Walsh’s mic. Followed by “What the f*ck are you doing” and then a more composed “He went for my eye there.”

Walsh referred to the TMO but replays were inconclusive. Matera has since been cited after the incident was deemed to have met the Red Card threshold for foul play. He is alleged to have contravened Law 10.4 (m) Acts contrary to good sportsmanship.

Fifteen minutes later South African lock Eben Etzebeth cleared out Argentina number eight Leonardo Senatore at a ruck but after getting him in some kind of choke hold, Senatore allegedly bit his arm.

In what was an interesting exchange between skipper Jean De Villiers and referee Walsh, De Villiers rejected the offer of making a note of the incident for the citing commisioner, and instead told Walsh that they’d like the benefit during the game. Walsh acknowledged his point, but somehow communication with the TMO failed at that time, so they played on.

After a review of the video footage, the citing commisioner felt that the alleged bite was also worthy of a red card offence, so Senatore has been cited.

“These are things, I believe, which are not part of rugby and I would like them to be sorted out,” said De Villiers upon arrival in South Africa on Monday. “Those are things that you don’t want to be sorted out afterwards – you want the benefit during the game.

“It is out of our hands now. I just tried to put pressure on him (Walsh) to take care of it on the field and, unfortunately, at that stage the lines of communications weren’t there.”

The judicial hearings will take place on Wednesday night (GMT). IRB suspensions for biting range between 12 weeks and four years. Gouging offences could carry an even longer ban.

You can view both incidents below, including the scuffle between Morne Steyn and Horacio Agulla

UPDATE: Senatore was suspended for 9 weeks while Matera was cleared