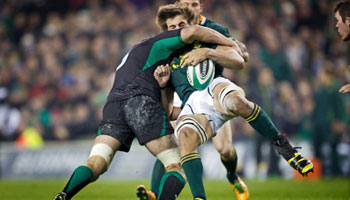 The Springboks fought back in the second half to leave Dublin 16-12 winners over Ireland, despite trailing 12-3 at the halftime break. While the match lacked precision, there was plenty of physical stuff on display, including these two huge tackles.

Ireland started the better of the two sides as the visitors looked totally out of sorts and gave away numerous kickable penalties, which Ireland flyhalf Jonathan Sexton eagerly slotted.

One always felt that the Springboks would come back at some stage, and they did so after the break when Ulster based Ruan Pienaar snatched a typically well taken try beneath the posts.

“I can’t tell you my message at half time,” said Bok coach Heyneke Meyer.

“There were a few harsh words, it was really unacceptable. We gave up too many penalties, we couldn’t get going, it was very hard work. But (now) I’m very happy with my team. At 12-3 down they showed lots of character and I’m proud of them.

“They learned a lot today and it’s a step forward,” he added. The win wasn’t pretty but scoring 13 unanswered points in the second half did the job.

Here is a quick look at two of the bigger tackles in the game, one from each side, as Mike McCarthy smashed big Eben Etzebeth early in the second half, then Marcel Coetzee contributed to an early exit for former countryman Richardt Strauss.

Unfortunately the host broadcaster didn’t show replays, despite there being lengthy injury breaks directly after each hit. Here are two short clips anyway, as they’re both worth another look.

More match clips & highlights will be posted soon. If you’d like to contribute or make a specific request, feel free to get in touch. You can also tweet and follow RD at @rugbydump.