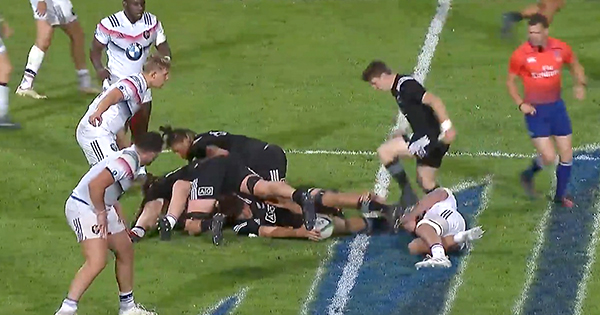 Jay Renton can find himself extremely lucky to have only conceded a penalty after this stamp during New Zealand U20’s loss to their French counterparts.

The replacement scrum half was seen viciously stamping on a French player rolling away, but the TMO and referee only deemed it a penalty after consultation.

While the stamp appears to be on the arm and not on the head, we have seen red cards given in similar situations and the lack of a yellow card is definitely questionable.

It is just another chapter in New Zealand’s recent controversy over red card leniancy and fans on social media were not happy.

Ooh that does not look good at all!!! How has that been missed?? #WorldRugbyU20s

Yet another serious New Zealand offence that – no doubt – @WorldRugby will ignore.

France went on to win the match 16-7 thanks to a try from Romain Ntmack and three penalties from Louis Carbonel.

Moana Pasifika to dedicate pre-season clash against Chiefs to Tonga

Moana Pasifika will use its pre-season clash against the Chiefs to raise funds for Tonga after the Pacific Island nation was rocked by a volcanic eruption and tsunami last weekend.