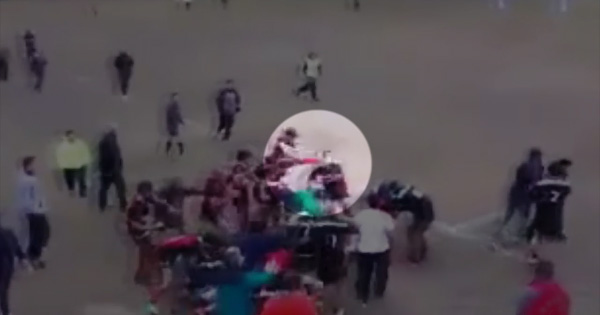 Last month we posted this shocking video of a brawl between Huazihul San Juan Rugby Club and Personal Bank Mendoza, two clubs in Argentina. Some heavy bans have now been handed down and several of these players will be wishing they had exercised better judgment on the day.

Unfortunately it was a very poor reflection on not just the two teams, but the fans as well.

After deliberation, The Disciplinary Board of the Union of Rugby de Cuyo has assessed bans for those players involved. Some are extreme to say the least.

Bans include six players from Huazihul and three from CPBM. The more severe bans are as follows:

We don’t quite know who is who in the video, but you can watch again and probably make sense of the bigger bans at least.

A brawl of this magnitude obviously raises very serious questions regarding player and fan safety.

As you can judge from the footage, situations like this can only produce – at best – serious injuries. It’s certainly not a stretch to imagine far worse. Hopefully lessons will be learned and the bans will be a wake up call to help prevent this madness from happening again in the future.