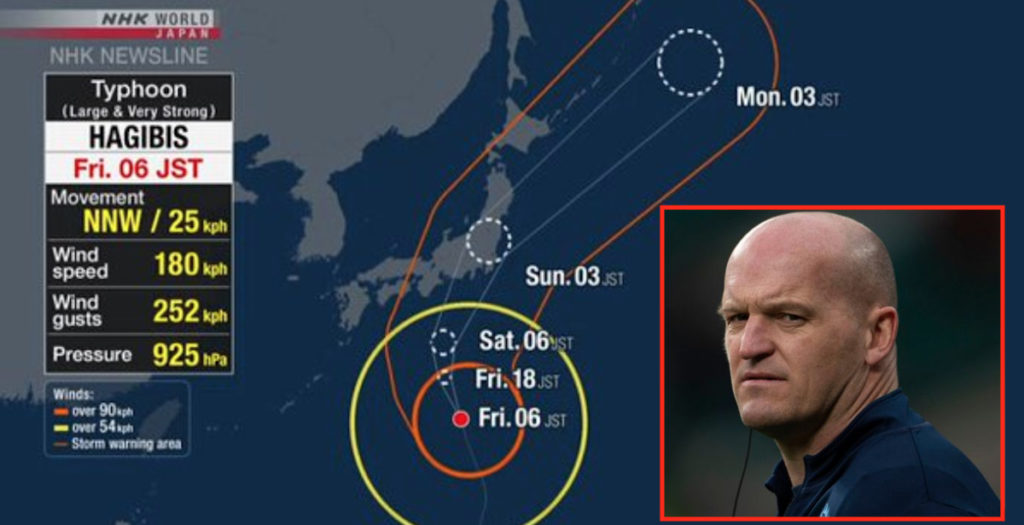 Scotland’s World Cup quarter-final hopes are hanging in the balance as they await news on the severity of Typhoon Hagibis in Japan.

A decision will be made at 12:00am BST on Sunday morning as to whether their final group match against Japan goes ahead, and it will likely be played behind closed doors if it does.

Stadium inspection on Sunday due to take place at 0600 Japan time. Decision expected at 0800. If game does go ahead strong chance it’ll be behind closed doors. Crucial 36 hours coming up for #RWC2019

The Scots must win this game in order to progress to the knockout stage of the competition without letting the Japanese get a bonus point, assuming Ireland beat Samoa on Saturday.

Yesterday (11 October) Scottish Rugby Union chief executive Mark Dodson announced that the union had sought legal advice to try and postpone the game by 24 hours, despite signing a participation agreement with the other nations prior to the tournament.

If the game between Scotland and Japan is cancelled, both teams will be awarded two points meaning that the hosts would reach their first ever World Cup quarter-final, while Scotland will likely finish third and exit the tournament.

Many Scottish fans and former players have not taken the news lightly, turning to social media to voice their concerns and opinions.

I’v spoken to people from World Rugby and the SRU today about the typhoon disruption. The following seems relevant –
1. All teams signed up to the tournament rules, but they were mindful of the ‘robust contingency plans’ said to be in place.

Spot on from ⁦@TEnglishSport⁩
Sergio Parisse hits the nail on the head also. NZ would never be dumped out of the RWC in the manner that Italy have.
Rugby World Cup: Typhoon Hagibis met with ‘woeful intransigence’ in Japan – BBC Sport https://t.co/qs4uIYyl9C

The Scotland game v Japan quite simply has to be played in some shape or form or this tournament will always be remembered for the wrong reasons @ITVRugby @EnglandRugby @Scotlandteam https://t.co/LkE2gYJNVk

So the Japanese Rugby Team (ahead of their match against Scotland tomorrow which is still TBC) was not gonna let a Typhoon stop them from their Pre match run. “It’s only a puddle” the coach says!! #TyphoonHagibis #RWC2019 #JAPvSCO pic.twitter.com/AcrKTm5dpG

.#TyphoonHagibis starting to build in #yokohama but still 7 hours till it reaches its peak! 🇯🇵😳☔️ pic.twitter.com/CijQvJ20xv

As much as I don’t want to contemplate it, but given the images coming out of Japan there is no way the #JAPvSCO is going ahead. 😩 Scotland heading out of the World Cup in the most Scottish way imaginable. Stay safe to all affected.