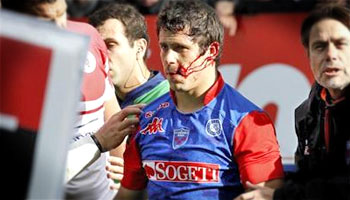 Grenoble celebrated a 34-21 home win over Biarritz and a move up to the top six of the Top 14, but the win came at a price as they lost a few players to injury, and none more dramatically than scrumhalf Valentin Courrent, who was sliced open by his teammate.

Biarritz suffered their sixth loss in a row despite scoring twice, through Zee Ngwenya and Marcelo Bosch, as  Grenoble maintained their unbeaten record at Stade Lesdiguieres this season.

Young flyhalf Jonathan Pelissie took full advantage of the opposition’s ill-discipline as his boot kept Grenoble in the lead throughout, aided by their only try of the game, scored by scrumhalf Courrent.

His try came from a well contructed lineout move early in the first half, but ended in disaster as he popped up over the tryline only to be met with the boot of Australian teammate Anthony Hegarty.

“It was a tough game. Half back had to get 26 stitches to his top lip don’t think he was to happy with me,” Hegarty told Brumbies assistant coach Laurie Fisher on Twitter.

The studs of his boot came into contact with Courrent’s face and sliced him from the lip up. The former Biarritz halfback had to leave the field and was taken to hospital to be stiched up, and will no doubt have a bad scar, but an interesting story to tell in years to come.

If you’re curious, you can see a closeup of the damage by clicking on the image above. You can also view how it looked in the change room afterwards, courtesy of a Hegarty tweet here.