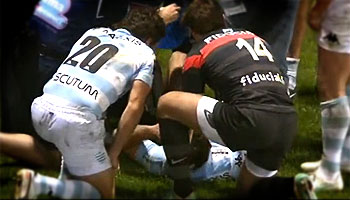 Racing Metro’s injury crisis got worse this week with the news that wing Julien Saubade has been ruled out for the rest of the season after having twisted both his left knee an ankle. To add insult to injury, it happened in a late tackle on the final whistle.

Toulouse beat Racing Metro 32-13 in their Top 14 game a week ago, and as the Paris based side went in search of a consolation try, Saubade was hit into touch by Clerc, without the ball.

Unfortunately the impact of the blow was felt in the left leg and ankle of Saubade, which he twisted, as well as rupturing cruciate ligaments in his knee.

The 29 year old could be out for up to eight months following the horrible injury, while France international Clerc will be playing against the Wallabies at the Stade de France this weekend.

To his credit, he was seen attending to and apologising to Saubade after the game, and made an effort to console him as he was carried off on a stretcher.

Saubade is the seventh Racing Metro playing to be ruled out for a long period, a list which includes fullback Benjamin Dambielle and fly-half Jonathan Wisniewski, who are both in lengthy layoffs for ruptured cruciate ligaments and a herniated disc respectively.

Should Clerc have been punished for this, or is it just an unfortunate part of rugby?