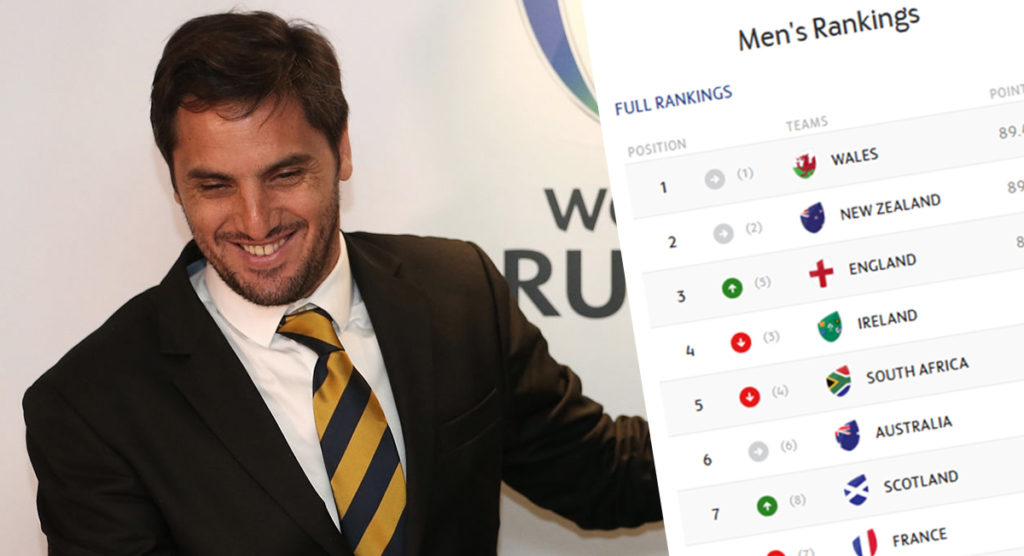 For the past ten years, the top of rugby’s world rankings has barely been mentioned by anyone due to the All Blacks dominance of the position. But Wales’ ascent to the top two weeks ago has now made it one of the most keenly discussed topics.

Suddenly there have been swathes of criticism of the system, a system that has given Wales, England and Ireland the opportunity to climb to number one over the past few weeks.

Vice Chairman of World Rugby Augustin Pichot has now weighed in on the debate, claiming it is “ridiculous” how Wales can climb to number one despite last beating the All Blacks in 1953.

The former Argentina captain also said the ranking system does not treat either Italy or his home nation fairly, as they have tougher schedules being in the Six Nations and Rugby Championship, respectively.

“It is a ranking that is badly done and I said it the first day I arrived at World Rugby,” Pichot said in a Spanish interview.

“It has no order, it is all mathematical and I would say that it is almost a matter of marketing. It’s ridiculous! I’m going to change it. I assure.”

As expected, Wales fans are not going to lie down and accept those comments, and have responded on social media.

Agustin pichot. You, sir are ignorant. Wales have beaten Australia, Boks, Ireland the past 12 months, the 3 teams NZ lost to. So we get more ranking points. Your bosses create the criteria

A huge number of fans have said that Wales’ 14-match win streak over the past 15 months does not lie, where they have beaten the likes of South Africa, Australia and Ireland, all of whom have beaten the All Blacks in the past year.

Many fans have also said that Pichot has not voiced his opinion in the past when the All Blacks sat at the top and that it is only because Wales are number one that he is critical.

It seemed very unlikely that the former scrum-half was going to be able to pass these comments without facing a backlash, and that has indeed come from the Welsh fans who feel that Warren Gatland’s side are rightfully ranked number one.

He makes no sense at all. You can win the world cup without beating the number 1 team. The numbers dont lie… 🏴󠁧󠁢󠁷󠁬󠁳󠁿

Imagine any sporting league in the world where you couldn't be on top, if it meant that there was a less successful team (that you happen not to have played for over a year, through no fault of your own) who would then finish below you. Pichot is a bellend. https://t.co/zO3vRNnHBC

This dismissal of mathematics is very Trumpian. Look at Wales last 12 months v NZs. Look at how god awful the Boks and Wallabies have been the past couple of years and therefore the reduced value of AB wins v the highly competitive 6N teams. Wales fully deserving of no1 spot.

Did he call them ridiculous when the formula for calculating them was agreed? If fudges are put it, it's a slippery slope. The rankings are not strictly speaking the best team in the world, it's the team with the best recent record in the world.

In Pichot’s defence, he has only echoed what many fans, particularly from New Zealand, have been saying since the Grand Slam winners displaced Steve Hansen’s side.

Many of the complaints have been that Wales have fortunately faced many of the top ranked sides in Cardiff, which is a veritable fortress, while their away wins have come against the likes of Argentina, who have won three of their last 26 matches, and an experimental Springboks side in Washington D.C.

But all Wales could do was beat those teams, which they did, and on paper they undoubtedly have the best record over the past year or so. Whether they would beat the All Blacks or not is academic as they have not played.

Ultimately, with the World Cup under a month away, these rankings – which may well change again in the coming weeks – will not be playing on the coaches’ minds too much.