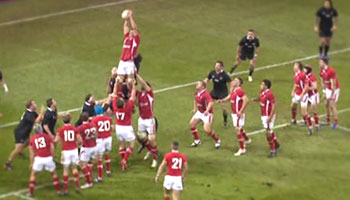 Wales suffered their sixth defeat in succession on Saturday after they were convincingly beaten 33-10 by the All Blacks at the Millennium Stadium in Cardiff. They did score in the second half though, giving new meaning to the term team try.

A fifteen man maul drove over the line after Wales used an old Warren Gatland trick to push 13 men into the lineout to catch the opposition forwards off guard.

Ireland did it against Argentina way back in 1999 when Gatland was coach too.

On this occasion it worked after Rhys Priestland kicked for the corner, finally finding touch after a few attempts that went astray in the first half. The Welsh had aimed to attempt the lineout early in the game, hoping to shake things up with the All Blacks early on.

When it finally happened, the AB’s didn’t look incredibly interested in defending it, particularly at 33-0 up, but it was a great moment as center Scott Williams barged his way over the tryline.

“That’s the way we wanted to take the game to the All Blacks. You’ve got to do that,” said Gatland.

New Zealand coach Steve Hansen said post match that he thought the Welsh tactic of not opting to take kickable penalties early on was crazy.

“Maybe they didn’t think we were going to score many points, or they weren’t going to be down there again so they had to score off them,” he said.