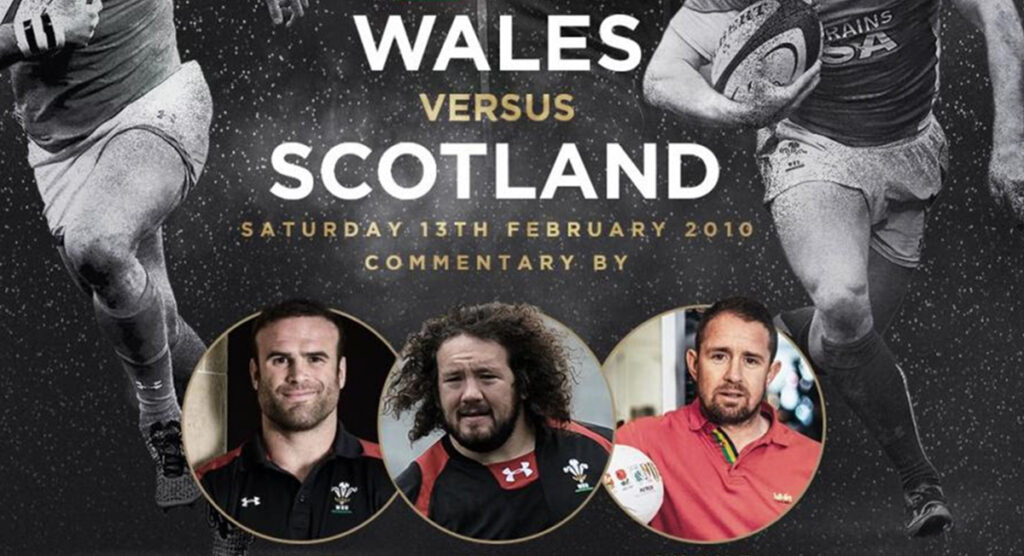 The Welsh Rugby Union today announced that a trio of Welsh rugby legends will reunite this Wednesday evening (27th May) at 19:30 (UK) to perform live commentary on a classic Six Nations encounter in the name of charity.

Jamie Roberts, Shane Williams and Adam Jones, with close to 300 Wales and British and Irish Lions caps between them, will relive the sensational 2010 clash with Scotland in Cardiff by giving ‘picture in picture’ commentary.

Fans will get a unique insight into the never-give-up attitude of the Welsh rugby team, which was encapsulated in the game’s hectic finale. As commentator Andrew Cotter put it at the time, it was “the most dramatic game in this season’s Six Nations, and perhaps in any Six Nations.”

It follows the highly entertaining live commentary by Roberts and George North on the momentous Wales v England match in 2013, and Guinness Six Nations Rewind matches involving stars from Ireland and Italy.

Viewers enjoying the match commentary are being asked to donate what they can to Velindre Cancer Centre, one of the largest of its kind in the UK, and of which Williams is a patron.

Andrew Morris, Head of Fundraising at Velindre Cancer Centre, said: “This online event will be a real fillip and hopefully bring some excitement and enjoyment to lots of people at a very difficult time. Velindre staff are dealing with a pandemic whilst also offering exceptional support to patients and their families who are dealing with cancer. We are extremely grateful to Shane, Adam and Jamie for their support.”

Visit the Velindre Fundraising website to learn about the charity’s good work.