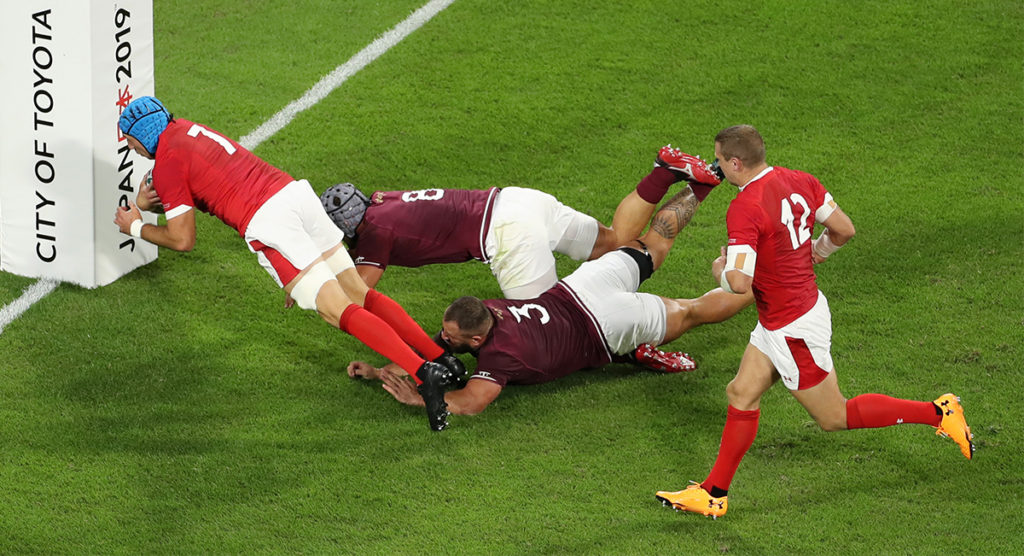 After former Wales attack coach Rob Howley was sent home from Japan last Tuesday, there were many questions about how the team would perform against Georgia on Monday. Thankfully for their fans, they turned up.

Former Wales flyhalf Stephen Jones replaced Howley last week, and was set the unenviable task of implementing a structure that has been built by Howley over eleven years in the space of six days. Jones was not going to revolutionise the Wales team in such a short period of time, his job was simply keeping an even keel.

So when Jonathan Davies seared through the Georgian defence two minutes into the match from a perfectly delivered flat pass from Gareth Davies, it was the perfect start to the post-Howley era.

Getting the bonus point before halftime, including another strike move to put Josh Adams in from a lineout, would have pleased Gatland and Jones and given the rest of the competition a glimpse of what Wales are capable of.

It was a performance that impressed many Welsh fans on social media as well, particularly the first half display. Wales’ attack has come under some criticism in recent years, particularly in 2019, where they scored the fewest number of tries alongside Italy, despite winning the Grand Slam. So to show the attacking flair that they did, particularly from first phase ball, will answer some critics.

Of course, Georgia are not the toughest opponents that Wales will face this Rugby World Cup, but seeing as Gatland’s side only managed to score one try against them when they faced off in the 2017 autumn, this is a marked improvement.

Six tries is the perfect way to start a RWC, and may have put to rest any questions over their attack. It may be a stretch to say that this is Jones’ influence coming through already, but it may suggest that the team have not suffered too much from the change of coaches.

This is what some fans had to say:

I know it's only Georgia but this is the best Wales have looked in attack for ages. I wonder if the attack coach leaving has anything to do with it? #WALvGEO pic.twitter.com/OgbQwp5zYa

Stephen Jones has done it, I've never seen Wales attack like that with howley #WALvGEO

Gatland will be disappointed with the second half performance but some positive signs early on for Wales, especially in attack. The scrum needs some serious work though.

Welsh attack and scrum have massively improved, love to see it 🏴󠁧󠁢󠁷󠁬󠁳󠁿🏉 #WALvsGEO

Very good start from Wales I thought. I don't read too much into a bit of a lapse in concentration with the game won. Set piece held up well, some lovely attacking play. And Georgia are no mugs would have been hard if we hadn't turned up first half.

Wales face Australia next Sunday in what will prove to be the true test of their attack and where they are after the coaching reshuffle. While Wales’ defence has never been questioned, Jones will be under the spotlight next week as Wales seek to take a commanding position in their pool.