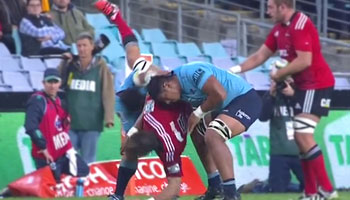 Waratahs tight forwards Will Skelton and Tolu Latu have been suspended for two and four weeks respectively following a lifting tackle against the Crusaders on Saturday. In a repeat of last year’s Super Rugby final, the Waratahs won the match 32-22.

Skelton was involved in a few incidents that had to be checked by the TMO, with the shoulder shot on Richie McCaw one that Crusaders fans wouldn’t have been too happy with.

This challenge, combined with hooker Tolu Latu, has resulted in a two week ban for the giant, with Latu, who was yellow carded, picking up four weeks on the sidelines.

“Two offending players, Skelton and Silatolu Latu, were involved in the incident,” said SANZAR’s Robert Stelzner SC, who precided over the disciplinary hearing.

“Latu played a more active role in the lifting and twisting of their opponent, Sam Whitelock, contributing more significantly to the end result than Skelton. Skelton nevertheless also lifted and twisted Whitelock in the tackle, which is why he too was found to have breached the applicable Law.

“Given the lesser extent of his involvement however, the sanction in the case of Skelton did not in my view warrant an increase from the entry level sanction to serve as a deterrent.

“He was unaware of the actions of his fellow player, Silatolu Latu, and although he dropped his opponent after he had lifted and turned him, it appeared that Latu was the player who had continued with the tip tackle causing their opponent to land in the manner in which he ultimately did.”

The Waratahs plan to appeal the bans, while coach Michael Cheika was pleased with Skelton’s menacing influence around the park. He defended his tackling technique.

“I’m not sure what he’s done wrong with his tackling technique, he’s just been tackling guys. The thing with Whitelock was a little bit unfortunate because he was just trying to get him down on the ground. Two guys like that can’t really know what the other is doing.

“Will is taller than everyone, so he doesn’t really tackle in the traditional style, of getting down. He wraps arms around and he goes to the upper body to wrestle guys to the ground a bit more because he’s a big guy.”

Francois Steyn was recently banned for a tip tackle that also involved another player, so while the incidents aren’t identical, it’s interesting that on this occasion both tacklers received bans.

UPDATE: Both players have had their appeals rejected. Full details

A SANZAR Appeals Committee, chaired by Lex Mpati (South Africa) and comprising Adam Casselden (Australia) and Chris Morris (New Zealand) has unanimously dismissed an appeal brought by the Waratahs against the decision of a judicial hearing that found Will Skelton had contravened Law 10.4 (j) – Lifting Tackle.

The Committee dismissed the appeal on the basis that the appellant was unable to prove that the Judicial Officer’s initial finding was in error, or that the sanction imposed was manifestly excessive.

As to the appeal against the finding of a contravention of Law 10.4 (j), the Committee was not moved by the submissions made on behalf of Skelton by counsel, Bruce Hodgkinson SC, that but for the participation of another player, Silatolu Latu, the tackled player would not have been taken through the horizontal such that his upper body came into contact with the ground first.

As to the sanction imposed, it was argued, amongst others, that the Judicial Officer erred in holding that Skelton was reckless in the execution of the tackle. The Committee found no fault with the Judicial Officer’s finding and determined that the initial two-week sanction was appropriate. As such, the player remains suspended from all forms of the game for two weeks up to and including Saturday 6 June 2015.

The Committee dismissed the appeal on the basis that Latu was unable to persuade its opinion that the sanction was manifestly excessive. Latu’s ground of appeal was that the four-week sanction imposed was not fair in all the circumstances.

The Committee was not persuaded by the submissions of counsel for Latu, Bruce Hodgkinson SC, who referred to other decisions for purposes of comparison. Counsel argued that the addition of two weeks to the low-end entry point of four weeks, applied by the Judicial Officer as a deterrent, was not consistent with the approach adopted in some of those decisions.

The Committee determined that the initial four-week sanction was appropriate. As such, the player remains suspended from all forms of the game for four weeks up to and including Saturday 20 June 2015.