WATCH: Scrum-half stretchered off after careless tackle straight from kickoff 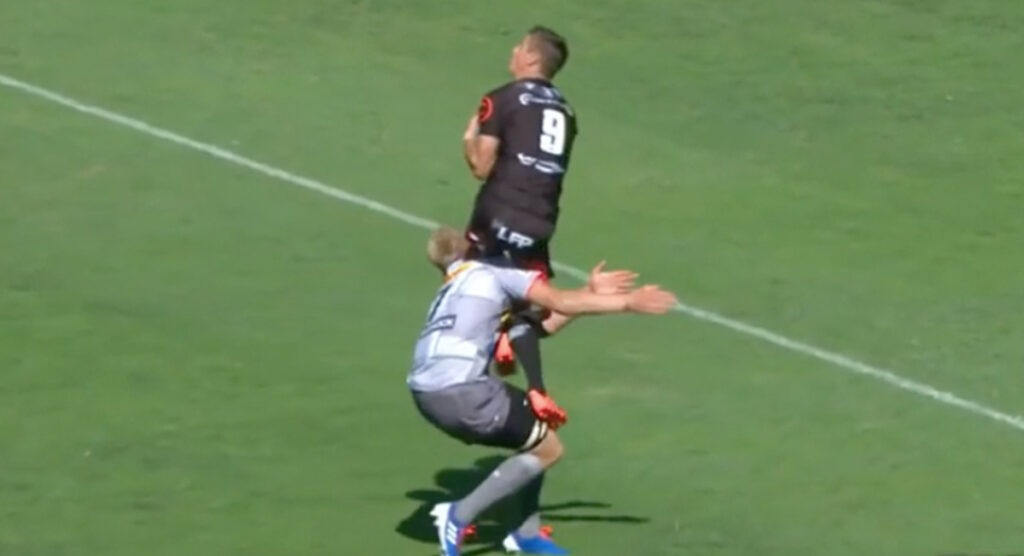 Stormers flanker Johan du Toit has been cited for a careless tackle committed mere seconds into their Super Rugby match against the Sharks. Scrum-half Louis Schreuder had to then be stretchered off after the collision left him defenceless and dropping to the ground.

Referee AJ Jacobs decided on a yellow card, despite TMO Willie Vos suggesting that it should have been red.

The SANZAAR citing commissioner has since agreed with Vos, stating:

“Johan du Toit of the Stormers has been cited for alleged foul play during a Super Rugby match at the weekend… Du Toit is alleged to have contravened Law 9.17 during the match between the Sharks and Stormers at Kings Park in Durban on 14 March 2020.”

“Upon further review of the match footage, the Citing Commissioner deemed in his opinion the incident had met the Red Card threshold for foul play.”

Law 9.17 states that: “A player must not tackle, charge, pull, push or grasp an opponent whose feet are off the ground.”

“The Case is to be considered in the first instance by the SANZAAR Foul Play Review Committee which will take place on Monday 16 March 2020, 9 AM (SAST), 6 PM (AEDT), 8 PM (NZDT) via video-conference.”

As it stood, du Toit was able to return to the contest, one which might very well be the last Super Rugby match played in South Africa for the foreseeable future.

Sharks claimed a 24-14 win to become the leaders of the South African conference. They also lead all conferences with 24 total points. However, it remains to be seen just what this means going forward in the face of the current global pandemic.