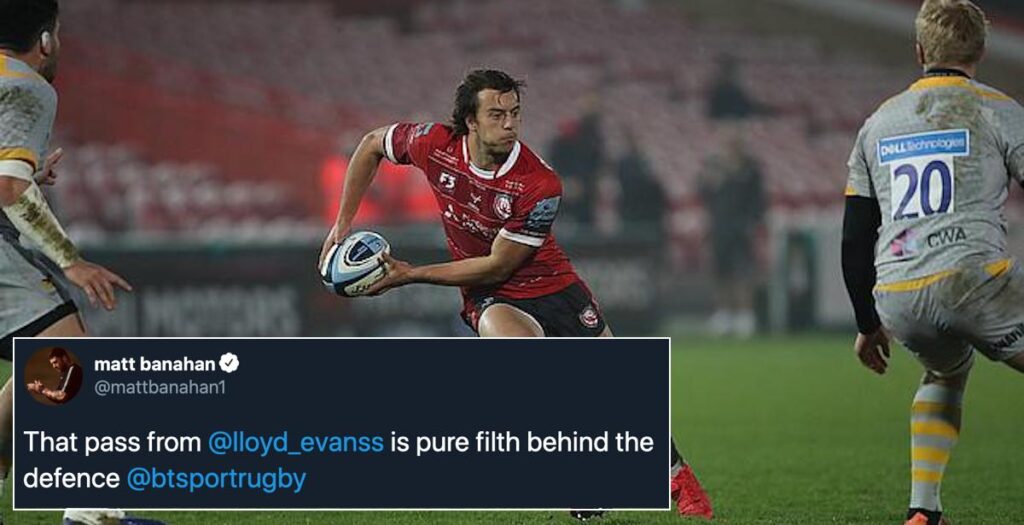 Gloucester fly half Lloyd Evans produced a wonderful delayed pass to set up a try against Sale Sharks on Saturday which has got the rugby world signing his praises.

The 25-year-old took the ball to the gain line and found centre Chris Harris behind the back of Sale’s Robert Du Preez in midfield which led to a try for winger Louis Rees-Zammit in the corner.

Commentators Ugo Monye and Lawrence Dallaglio raved about the pass from Evans while several players and fans have jumped to social media to praise the incredible piece of play.

This delayed pass from Lloyd Evans is PERFECTION! 😍

And let’s be honest, there’s no catching Louis Rees-Zammit ⚡️

Despite this amazing try, Sale went on to beat Gloucester 19-22 at Kingsholm Stadium leaving the Cherry & Whites bottom of the Premiership after five rounds.

Ridiculously cool under pressure from Lloyd Evans! What a seed that creates the space for Harris to go through who then puts a perfectly timed ball to Rees-Zammit to score! Sheer quality from the Alex King coached @gloucesterrugby attack! pic.twitter.com/TbTIJnhbbk

That pass from @lloyd_evanss is pure filth behind the defence @btsportrugby

The little pump of the ball and then the pass 👌🏼 https://t.co/XUllRzYlMl

Lloyd Evans is a class act, and I’ve said that for some time. Really coming through this season.#GLOvSAL

Lovely delayed pass from Lloyd Evans in that Gloucester try. Having Louis Rees-Zammit and Jonny May on the flanks is a disgusting luxury. Ollie Thorley not too shabby, either.

That’s a wonderful score! The pass from Lloyd Evans, who just delayed it after he’d passed his man – glorious! #GLOvSAL

I’d be suprised if Wales aren’t looking at Lloyd Evans.

That’s a quality try by Gloucester, what a pass by Lloyd Evans #GLOvSAL #GallagherPrem

Danny who? Absolute sorcery from Lloyd Evans on that try for Louis Rees-Zammit. Put that sauce on a highlights reel you cowards @btsportrugby #GLOvSAL #GallagherPrem

Lloyd Evans and Chris Harris perfect passes and no one is catching LRZ. Best finisher in the Premiership #glawsfamily