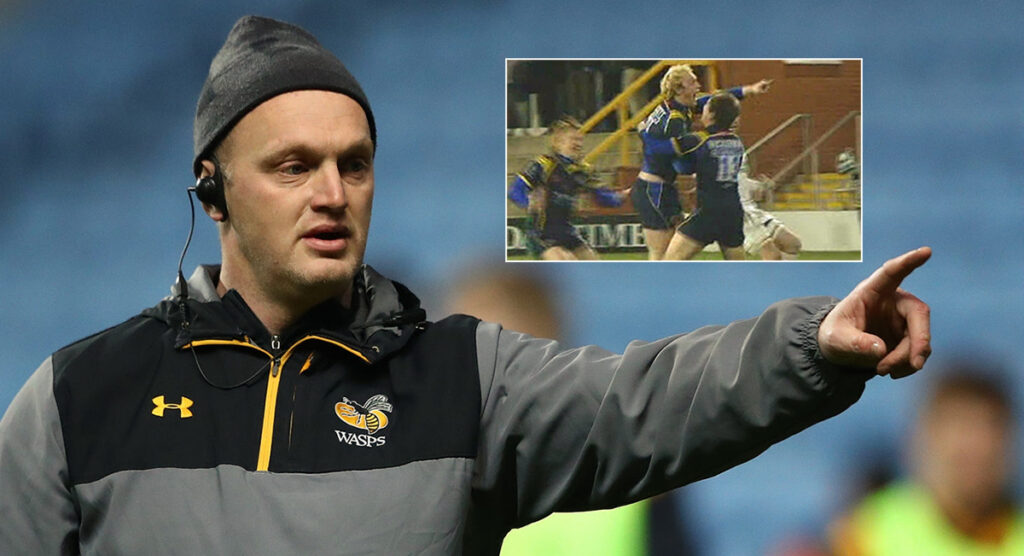 Wasps have today confirmed that current interim coach, Lee Blackett, has been appointed as the club’s full time Head Coach. Here is a look at those details, and the moment we featured with him in 2008.

Blackett stepped up from his role as Attack & Backs Coach to take the first-team reins in mid-February and his impact was immediate, overseeing 3 wins from 4 games which helped propel the club back into contention for a top-four finish.

In 2008, Blackett earned the honour of having scored the fastest ever Guinness Premiership try from kickoff, crossing the line in just 8.28 seconds.

He was playing for Leeds Carnegie at the time, and had this to say about the score:

“I said to Albie (flyhalf Alberto Di Bernardo) to give me the ball inside the opening minute but I didn’t actually mean within the first eight seconds! It was a shock when Newcastle missed the ball from the kick-off and it bounced straight back to me.

Joining Blackett as part of a new-look coaching team are Pete Atkinson and Richard Blaze.

Atkinson will become Head of Performance after the conclusion of his contract with the Italian Rugby Union. He has vast experience across a number of sports following highly successful spells with both Saracens and Leicester Tigers, as well as working at the English Institute of Sport and the ECB as their National Lead for Strength & Conditioning.

Currently at the RFU working with the England Women’s rugby team, Blaze will take up the role of Forwards Coach. Blaze joined England Rugby as part of the coach development agreement in November 2017, working with the England U20 team. He previously worked as Forwards Coach at Leicester Tigers, winning the Premiership title in 2012/13, having played for the club from 2007-10.

“The last few months have been fantastic, and I can’t thank the coaches, players, staff and supporters enough for the support they’ve given me,” said Blackett.

“I’m really excited to have the chance to work with Pete and Richard as we prepare to get the team back playing again and hopefully deliver the success this club deserves.

Today it has also been confirmed that current Forwards Coach Andy Titterrell will be leaving the club.

“I’d also like to place on record my thanks to Andy for his time at Wasps. He’s a very popular member of the group and we wish him well in his next venture,” added Blackett.