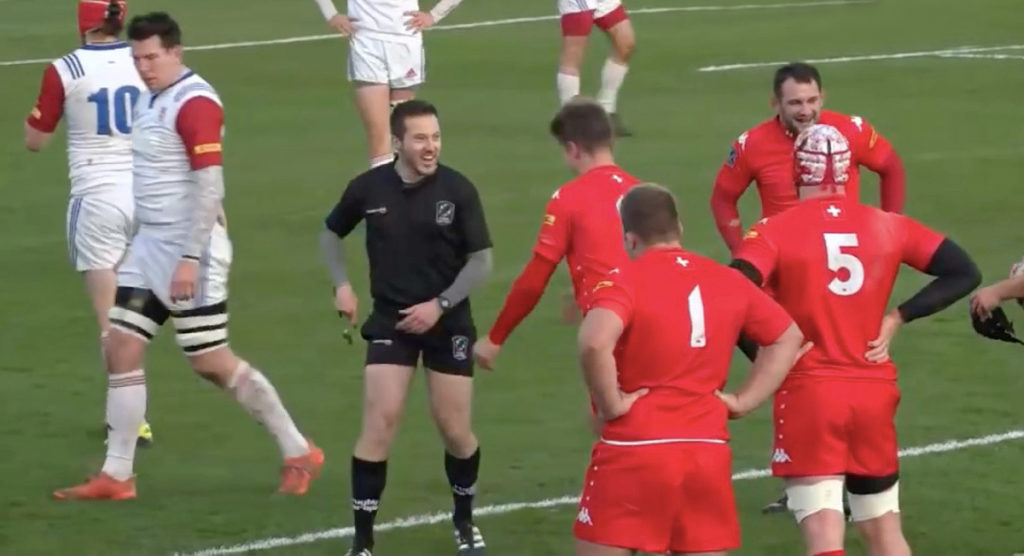 Switzerland and Czech Republic met in a Rugby Europe Trophy contest in Yverdon recently, with both men and ladies fixtures taking place. In the men’s match there was a comical moment, one that reminded us of another similar incident twenty years back.

It was the first time that both men’s and women’s fixtures took place in Rugby Europe matches in the same location, on the same day and with the same nations.

The women’s match was won 10-5 by the Czech Republic but in the men’s contest, Switzerland were too good, claiming a 17-5 win thanks to an early try by their right winger.

However, just before half time it was left winger Florian Escoffier who got in on the action after he found the referee’s yellow card lying on the turf. He kept it in his sock for some time before seeking out the official, and there was a nice bit of friendly banter between the two, as can be seen below.

Some of you might remember that a similar thing happened in 1998 in South Africa, except that didn’t end as well after one of the biggest referee overreactions of all time.

In a Currie Cup match against Griquas, Lions prop Balie Swart found referee Andre Watson’s red card on the floor and he did something similar to Escoffier, except in a slightly more determined manner.

Watson, who was usually good for a laugh, had serious sense of humour failure as he snatched the card from the experienced prop before turning it on him and sending him from the field.

Skipper Andre Vos could do nothing but watch in horror before helping Swart towards the sideline.

It was good to see that on this occasion in Switzerland at least, the referee saw the light side of things!