Wayne Barnes laying down the law to Corry & Borthwick 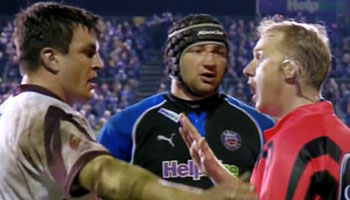 This amusing and impressive clip is from earlier in the Guinness Premiership season, and is basically a nice example of the referee taking complete control of matters, and speaking to two of the hardest men in rugby as if they’re disobedient little children.

Barnes, who notoriously took a lot of criticism after his handling of the 2007 World Cup Quarter Final between New Zealand and France, has done well to put that behind him and move on.

In this clip he takes command brilliantly after there’s a dispute over the ruling of the try, as the touch judge made an error, causing confusion all round.

Martin Corry and Steve Borthwick, Leicester and Bath captains respectively, start a shouting match about it, so we see Barnes put them in their place in no uncertain terms.

It’s a great piece of officiating and a nice example of how a young ref can assert his authority in a game, making sure that he doesn’t take any nonsense from anyone.

It’s also really funny to see how he shuts down Corry and Borthwick, making them look like they’re getting a telling off from their junior school principal.