WIN a copy of the official Rugby World Cup 2011 game 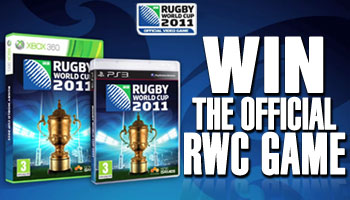 By now you’re probably well aware of the official Rugby World Cup 2011 game, and have no doubt seen the trailer too. We’ve got a gameplay tutorial video today that highlights some of the new features. We’ve also got copies of the game to give away.

The task of writing a review for the game is a fairly challenging one. We’re not exactly spoilt for choice these days when it comes to rugby games, so any rugby game is a good rugby game. The last big one was Rugby ’08, which is actually made by the same people who bring us this version.

That’s a bit of a double-edged sword because while the newer game has updated features, player likenesses, stadiums, and far better graphics, there’s a similiarity there which is quite difficult to ignore. If you’re like most of us, you played Rugby ’08 on your pc, over and over again. This year, you can play it on your console, which is a massive improvement right off the bat.

Does it live up to expectations? Possibly not, as the player models and movements don’t seem to have changed too much. There’s also a lack of gameplay modes and different tournaments. But, lets not forget that this is the Rugby World Cup game afterall, so that’s what you get. Great stadiums, expert choices in commentary, and all 20 teams to choose from and play against.

In summary, it’s an enjoyable game. Once you get the hang of it, it’s a big improvement on the previous version. The on screen graphics give a great RWC feeling and some of the new features, as explained in the below tutorial video, make certain aspects of the game far more complete.

You could WIN a copy of the game by leaving a comment below! Make sure you’re registered, and state which version you’d want, Xbox or PS3.