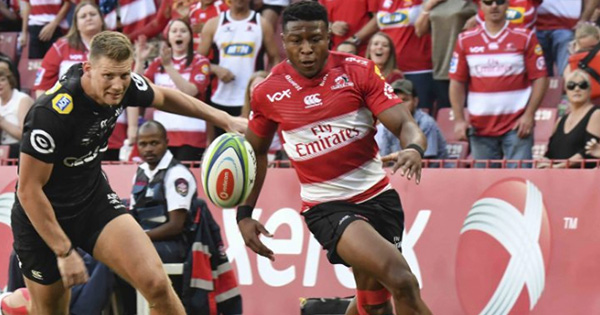 The 2018 Super Rugby season got off to a cracking start with four of the teams from the South Africa Conference in action during the opening weekend. The best try belonged to Lions winger Aphiwe Dyantyi, with his brilliant pace and grubber score against the Sharks.

Warren Whiteley showed quick hands in cycling the Andries Coetzee pass to Dyantyi, who exploded down the line, kicking ahead just inside the 22 before collecting it himself for the score.

Tries also went to Kwagga Smith and two to Lionel Mapoe for a brace. Fittingly, Dyantyi’s try was also enough to help him bag Man of the Match honours as the Lions downed the Sharks 26-19.

We’re lucky to see the try at all as he very nearly gave up on the sport altogether. Speaking to Campus TV South Africa, Dyantyi – who is completing an honours degree in Marketing Management – admitted he’s had a mentally challenging road.

“I had a bit of a big head going into my Grade 11 year at Dale College… It turned out to be a very humbling year because I thought I was going to automatically make it into the first team. It didn’t happen like that. I ended up playing soccer.”

Thankfully, he found his way back.

“I was living on res at campus. Some of my friends from school asked me if I could play for the Koshuis team as they needed players. They played on a Wednesday, so I was happy to help them out. After a few games, I was asked to train with the Varsity Cup team and that’s when things started happening.”

It speaks clearly to the outstanding talent the Lions, who made the last two Super Rugby finals, possess. They couldn’t have asked for a better start to their 2018 campaign.