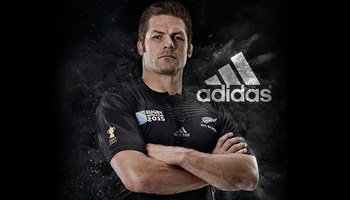 So what do you think of the new #allblacks Rugby World Cup jersey? It looks pretty slick, and pays homage to the original 1905 ABs ???????? Well played @adidas

The All Blacks and adidas launched their new Rugby World Cup jersey earlier this week. Get a closer look at it and hear from coach Steve Hansen, as well as skipper Richie McCaw.