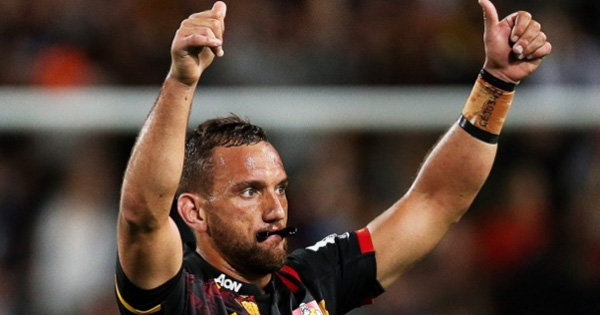 The Chiefs have had a great start to their 2017 Super Rugby campaign, winning two from two. There were a few notable talking points from their latest match against the Blues, namely the Steven Luatua red card, but also this great piece of skill from Aaron Cruden.

Cruden, playing in his 100th Super Rugby match, was able to set up a James Lowe try with this amazing tip pass just after half time, with the Chiefs already up 29-9.

Working inside the Blues’ 22 and going left to right, the ball found it’s way into the hands of Lowe with a blink-and-you-missed-it tip-pass from Cruden for the score. Cruden went on to score 11 points and was instrumental in the scoring of three of the Chiefs six tries.

“We’ve got a great bunch of boys here. They work really hard and we feel like we’ve got the making of something if we can continue to push each other.”

With the explosion of Beauden Barrett’s form in 2016, it’s perhaps easy to forget what a talented fly half New Zealand have in Cruden. As a result, he’ll be leaving New Zealand and the Chiefs for Montpellier and the Top 14 later this year.

It’s safe to say the Chiefs and All Blacks will miss his class and leadership.

Incidentally, this week it was also announced that winger Lowe will be off to Leinster.

The Chiefs’ schedule doesn’t get any easier as they host the red hot Hurricanes this weekend.

Blues name young team for final round clash versus Waratahs

The Blues have taken the opportunity to mix experience and exciting youth in their line-up for the final round clash against the Waratahs in Sydney in the DHL Super Rugby Pacific competition on Saturday.