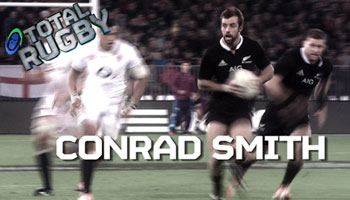 Total Rugby caught up with All Black centre Conrad Smith recently to speak about his life as an All Black, his midfield partnership with Ma’a Nonu, and what the future holds as we head into another Rugby World Cup year. He’ll be 33 next month, but hopes to be in England to defend the title.

Smith has played 80 Tests for his country, with a winning rate of an unbelievable 90% – he’s only ever lost 7 times at that level. It’s no coicidence either as Smith, along with midfield partner Nonu, has become an integral part of the team setup.

They equalled the record for the midfield partnership with the most Test caps recently, but with Nonu injured, won’t be able to add to that for a while.

This interview gives us a nice insight into the mindset of the man that has a law degree to his name.