Allister Coetzee is officially out, but SA Rugby refuse to name successor 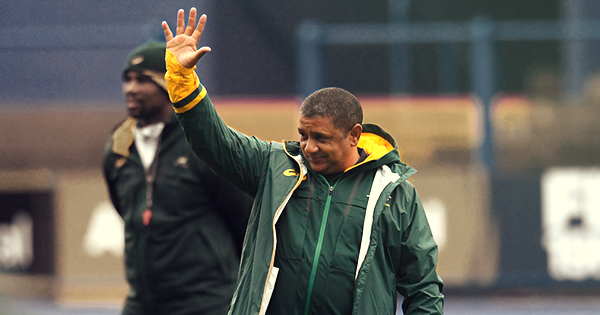 Allister Coetzee has officially parted ways with Springbok rugby after an announcement by SA Rugby Ceo Jurie Roux today. The worst-kept secret in South African rugby will no doubt be revealed soon too, as everyone speculates about who will become head coach.

SA Rugby announced on Friday that it had reached an agreement with Coetzee to part ways with immediate effect. This follows a record of just 11 wins from 25 Tests (44%) in the last two years.

Coetzee was admittedly thrown in at the deep end, but his selections and the performances to date have meant that his tenure coming to an end was inevitable.

Former Springbok flanker and Cheetahs and Munster coach Rassie Erasmus will take over as Springbok coach, however, SA Rugby are not prepared to make that official publicly just yet. Erasmus is currently in the Director of Rugby role.

“The Rugby Department of SA Rugby will manage the responsibilities of the Springbok coach, until the national team’s coaching and management group for 2018 is confirmed later this month,” said a statement today.

“I have always held Springbok rugby dear to my heart and will continue to do so and for that reason I think now is the time the team and me strike out in new directions,” said Coetzee, after the two parties ‘agreed to terminate the relationship after a two-year association’.

“I wish Springbok rugby every success in the future – as I have always done.”

Erasmus said this week that planning has been taking place as per normal.

“I can take you back to 2012 when Heyneke (Meyer) was appointed and we (the Rugby Department) did all the planning. A lot of the support staff were only confirmed shortly before the start of that first test series‚ and we beat England in that series. It was the same with Allister two years ago‚ and we beat Ireland 2-1.

“So there has been planning going on behind the scenes‚ and of course we want to get that clarity‚ but there is a process that has to run its course. However‚ it’s not hindering us in the background and it isn’t affecting my role as director of rugby‚ which is to ensure that we are as well prepared as possible to be able to beat England in that first test series.”

Confirmation of the Springbok management set-up will be revealed before the end of the month.

Samu Kerevi will miss Australia's Test against Japan on Saturday with the barnstorming centre ruled out with an ankle injury in a huge blow for the Wallabies.

'It's not you must win or else': Hooper's Bath vote of confidence

Stuart Hooper has admitted to talks with Bath owner Bruce Craig and CEO Tarquin McDonald in the wake of Sunday's 71-17 hammering.

Cities such as Los Angeles, Las Vegas, Chicago and New York have expressed an interest in holding World Cup games in the USA.

The All Blacks have fielded some exceptional locking combinations in recent years - think Sam Whitelock and Brodie Retallick, Whitelock and Brad Thorn, or Chris Jack and Ali Williams - and they're set to unveil another one for the ages.