Andre Taylor scores again with brilliant finish against the Rebels 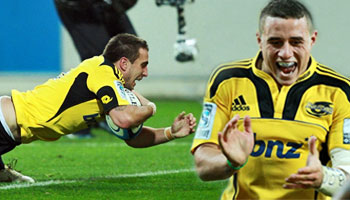 Prolific try scorer Andre Taylor crossed twice against the Rebels, taking his impressive tally to ten for the season. Here’s a quick look at one of those scores, which he finished brilliantly and is no doubt one of the tries of the season.

The game was one of the more entertaining of the weekend but the scoreline was pretty one sided, with the Hurricanes smashing the Rebels 66-24. It’s the same game that had those huge Motu Matu’u hits that were featured on here earlier in the week.

Young powerhouse winger Julian Savea scored a hat-trick but this try, which came about from a dart by the highly talented TJ Perenara, was one of the more memorable of the game.

Taylor and Perenara will no doubt be pushing for higher honours in the not too distant future. They’ve both been stand-out players for the ‘Canes this season, who famously sacked a bunch of their players in a Mark Hammett cleanout that was meant to rebuild the squad.

Peranara has made darting runs all season, and as we saw on Saturday, also looks like one of the hardest hitting number nines around, which are words that normally don’t go in one sentence.

The other vital part of the try was the catch and inside pass by center Tim Bateman, who has also been impressive this season and got the ball away despite being pushed close to the touchline.

The Hurricanes have named an unchanged team for Saturday’s meeting with the Waratahs.