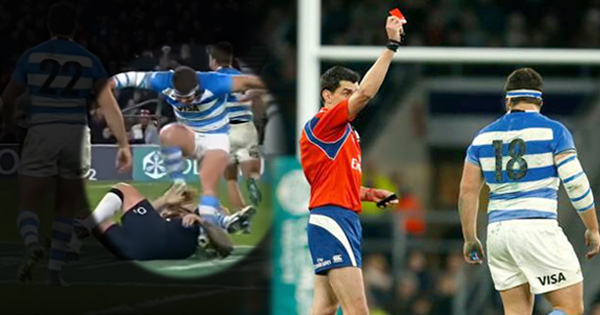 Another suspension was announced today as Argentina prop Enrique Pieretto has been handed a 7-week ban after he was red carded for stamping on the face of England prop Joe Marler at Twickenham last weekend. Marler was shown yellow for holding him.

Pieretto appeared before an independent disciplinary committee after contravening Law 10.4(b).

He accepted that he had committed an act of foul play, but felt that it did not warrant a red card.

The panel, chaired by Sheriff Kathrine Mackie (Scotland), alongside Graham Quinn (Ireland) and Neil Hennessy (Wales), having viewed video footage of the incident, listened to evidence and representations from and on behalf of the player, and reviewed all of the other evidence, found that Mr Pieretto had committed an act of foul play and that it had actually warranted a red card.

They determined that Mr Pieretto’s actions had been intentional and merited a top-end entry point based on World Rugby’s scale of seriousness, which carries a nine-week playing suspension.

They further determined that ‘there were no aggravating factors and that there were some mitigating factors such that his playing suspension be reduced by two weeks’.

Pieretto was therefore suspended from playing rugby for a total of seven weeks.

Due to his playing schedule, with a break until early February next year, he is free to play again on Monday 20 March, 2017.

In the same match, Elliot Daly was red carded for a dangerous tackle, and due to Marler’s yellow card  in this stamping incident, we got to see wing Jonny May’s hilarious flanking debut.

Queensland don't know whether to pack for two days or 10 but are ready for anything at the pointy end of the Super Rugby Pacific season.

Cornell du Preez: 'Two people died in the beds next to mine' - from intensive care to Toulon glory

Promising hooker Kapeli Pifeleti is looking to step on the career accelerator at Saracens and start winning trophies at the London club in the same team as his esteemed cousins, Mako and Billy.