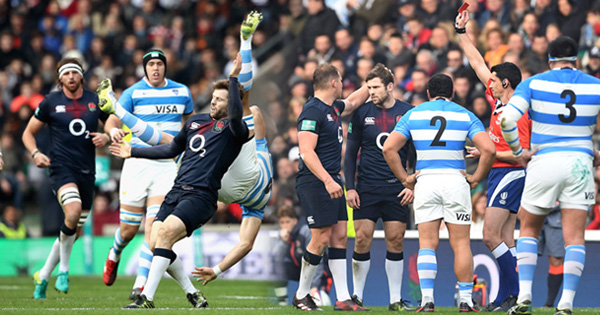 England winger Elliot Daly appeared in front of an independant World Rugby Disciplinary Committee in London today after he was red carded for tackling an opponent in the air during England’s Autumn International against Argentina on Saturday.

Daly saw red as early as the fifth minute when he mistimed a high ball chase and took out Argentina number eight Leonardo Senatore, in clear contravention of law 10.4(i), which relates to ‘Tackling, tapping, pushing or pulling an Opponent jumping for the ball in a lineout or in open play’.

After consulting with his TMO and viewing extensive video replays, referee Pascal Gauzere had no option but to send Daly from the field, despite his obvious remorse.

In today’s disciplinary hearing, chaired by Kathrine Mackie (Scotland), Derek Bevan (Wales) and Hugo Southwell (Scotland), Daly accepted that he had committed an act of foul play and that it warranted a red card.

Having viewed video footage of the incident, listened to evidence and representations from and on behalf of the player, and reviewed all of the other evidence, the Disciplinary Committee found that 24-year-old Daly had acted recklessly.

They ruled that the offence merited a mid-range entry point based on World Rugby’s scale of seriousness, which carries a six-week playing suspension.

However, they found that there were a number of mitigating factors – including his acknowledgement of wrongdoing, expression of remorse to the injured player and his good conduct at the hearing – so therefore they reduced the suspension by three weeks.

Daly is therefore banned from playing rugby for three weeks in to, up to and including Sunday 18 December 2016. He has a right to appeal, and was reminded of this during the hearing.

Argentina’s Enrique Pieretto was also red carded in the match after he stamped on Joe Marler late in the game, but his disciplinary hearing will only take place on Wednesday of this week.

England went on to win 27-14. View highlights of England vs Argentina here