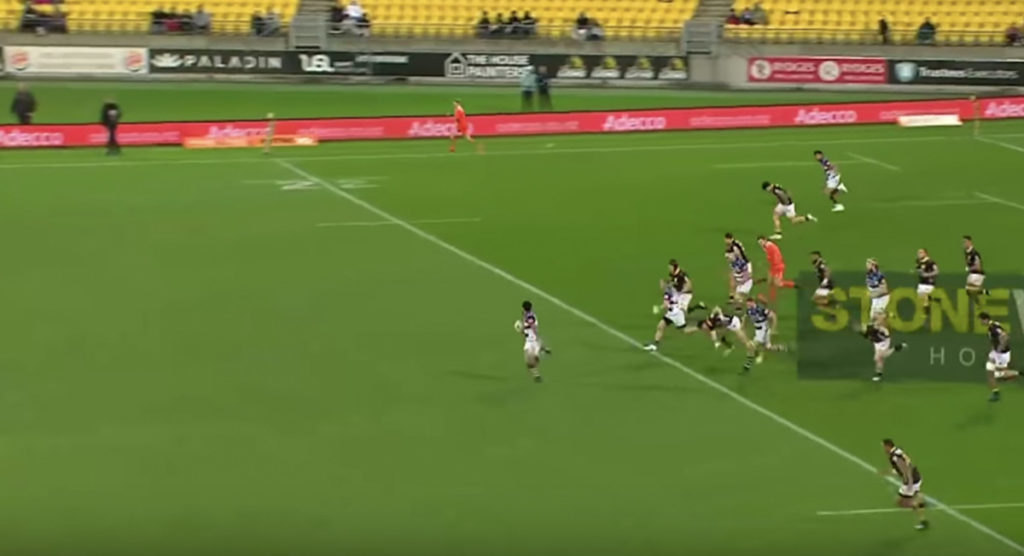 Auckland edged Wellington 29-24 in Mitre 10 action on Thursday night. Wellington was nursing a slim lead with just on 10 minutes to play when Auckland’s TJ Faiane broke from deep in his own half for this brilliant coast to coast try. With the win, Auckland move to the top of the Mitre 10 Premiership standings.

With Wellington leading 24-17 in the final quarter, Meteaki Kafatolu picked up an untimely yellow card for the hosts. The consequences of which were felt almost immediately, as only a couple of minutes passed before Auckland took advantage of their numbers out wide and Salesi Rayasi strolled in for a try.

Shortly after, Auckland found themselves deep in their own territory when Faiane collected an errant pass. He broke to his left, then straight through the opposing defence to go flying up the field before connecting with speedster Jordan Trainor.

For his part, Trainor gave a nice step to shake off the last defender before completing the coast to coast score and sealing the come-from-behind, bonus point win.

Auckland will take on Southland next Wednesday in the final regular season match, while Wellington will finish their regular season next Friday against Taranaki.