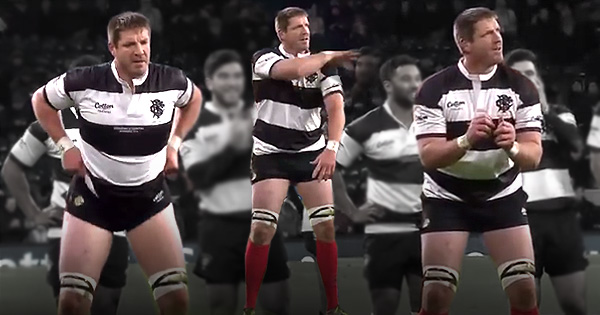 Argentina beat the Barbarians 49-31 in an entertaining game on Saturday, as Los Pumas scored seven tries, with a number of RWC stars on show on both teams. One of the funniest moments from the match came at the end though, as an unlikely kicker stepped up.

South African legend Victor Matfield, who skippered the Michael Cheika coached BaaBaas on the day, scored the final try of the match. His long time Bulls and Springboks locking partner Bakkies Botha had taken to the field a little earlier, playing in his final ever match of competitive rugby.

So when it came time for someone to convert the try, the ball was tossed in 36-year-old Botha’s direction, and he made an absolute meal of it.

Menacing on the field but a quiet, family man off it, Botha took the opportunity to channel his inner Dan Biggar, doing a quick impression of the now infamous pre-kick routine that we saw on numerous occasions at the World Cup.

He then shifted into the Jonny Wilkinson pose, before swinging his hefty boot at the ball.

It was a great end to a thrilling match, and left the players and crowd in good spirits, as well as gave Botha a nice end to a career that has included numerous accolades.

Old friend Matfield actually attempted a conversion in his ‘final match’ (before comeback) a few years ago for the Barbarians too, and that was also a bit of a disaster.

– View Highlights of Barbarians vs Argentina –