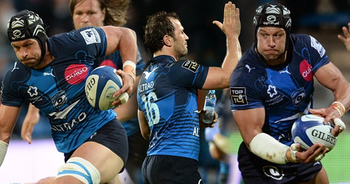 Montpellier moved up to third on the Top 14 table following a 45-21 victory over Agen on Saturday. Former Springbok number eight Pierre Spies had the run of the match, setting up a try for fellow South African Bismarck du Plessis with this powerful charge.

Du Plessis, who moved to Monpellier with his brother after the World Cup, actually scored two tries on the day, while Spies himself also scored in the bonus point win.

Last week Spies was also provider for the robust hooker with a neat lineout variation, but this week it was the kind of run that garnered him international attention many years back, showing his raw pace and formidable power with ball in hand.

Capped over 50 times, Spies’ Springbok career fizzled out following long term injury and lack of form. He was unwanted at the Bulls last year, so when Jake White’s Montpellier called, he made the move and now appears to be finding his feet again, showing glimpses of that potential everyone always knew a physical specimen such as himself possesses.

While Agen were within ten points with five minutes to play, two quick tries from Montpellier, including a second for winger Timoci Nagusa, stretched the scoreline and made it a more than comfortable victory in the end.

You can view the highlights wrap on page two, and the Du Plessis try below