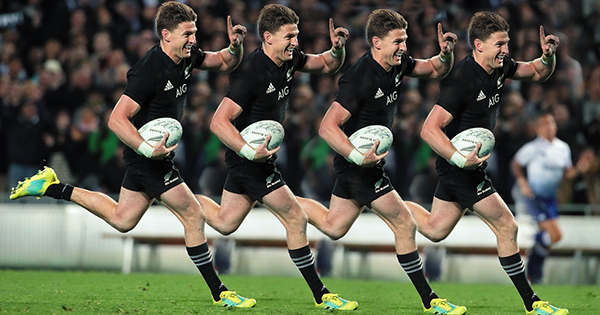 Beauden Barrett wrote himself into the history books on Saturday night, scoring four tries and 30 points to help beat trans-Tasman rivals Australia 40-12 and retain the Bledisloe Cup for yet another year.

Eden Park proved once again to be unassailable for the Wallabies, who had no answer for the magnificent fly half. Along with the points haul, he tallied 145 running metres and seven defenders beaten.

Barrett’s emphatic performance will go a long way to putting those voices to bed who thought room should be made for Super Rugby champion Richie Mo’unga.

He got the scoring started, slicing through the Wallaby defence for New Zealand’s first try. After leading 14-7 at the break, things exploded in the second half.

The All Blacks even shrugged off two disallowed tries, one of which would have been Barrett’s fourth. A few moments later he got the one that counted, allowing him to break Andrew Mehrten’s points record against the Wallabies with 30. He also became the fourth All Black to reach 500 test points.

Joe Moody and Liam Squire also scored for the winning side, while Will Genia and Reece Hodge got over for the visitors.

Once again, Michael Cheika’s side are left to pick up the pieces after another lopsided outcome. Speaking to reporters after the match, the topic of Cheika’s immediate future was on everyone’s mind.

When asked if he had plans on stepping away from the top job, he responded: “You wouldn’t know, you’ve never coached, you wouldn’t know it there’s a debate in my mind. I don’t know where you come off saying that. I told you exactly what I think about it, categorically.

Saturday’s match was also Owen Franks’ 100th Test, only a week after Sam Whitelock achieved the same, making him only the ninth All Black to reach that milestone and the second prop.