Behind the scenes with Nick Cummins and the Barbarians 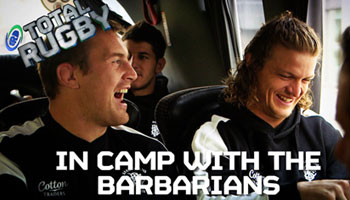 We all saw how well the Barbarians played against both Australia and the Leicester Tigers recently, and that was due in part to the kind of characters and talent they had in the multicultural squad. One of the most colourful of those characters was of course Nick Cummins, the Honey Badger.

In this Total Rugby segment we get to see a little bit behind the scenes with the BaaBaas as they prepared for the clash with the Wallabies while taking in some of the sights and sounds of London. Cummins leads the piece, and is as refreshing as ever in another entertaining interview.

Last night a Barbarians side played a Combined Services XV in a Remembrance match. The team was made up of mainly part timers or club players, but they did the invitational side proud as Josh Drauniniu, former Navy man now Worcester winger, scored two tries to contribute to a 31-15 win.