Best Tries from the 2007 USA Sevens 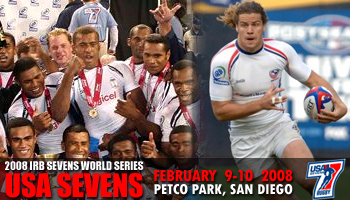 Last year at the USA edition of the IRB Sevens World Series we saw some fantastic action which produced some of the biggest hits and best tries seen in Sevens for a while. This year the action will take place on the 9th & 10th of Feb at the ideally situated PETCO Park in San Diego.

With the support and attendance for the tournament growing each year, the festival atmosphere is something worth experiencing if you’ve never been before.

Watch 16 of the world’s best rugby sevens teams playing in 44 matches over the course of the weekend . I personally won’t be able to make it, but some of the Rugbydump team will be there, as well as a few players who will be sporting the Rugbydump Merchandise so look out for that.

In this clip you’ll see some of the best tries from last year, including that massive hit by Todd Clever against Kenya, a swinging arm on Ryno Benjamin, and most importantly some of the incredible tries that show exactly why Rugby Sevens is such an exciting form of the game.