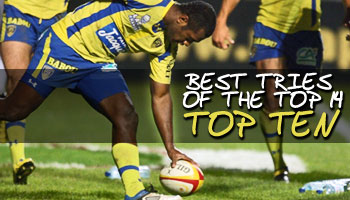 The French Top 14 has produced some fantastic tries of late, particularly in the last two rounds but this is a look at the Top Ten up until then, with just under ten minutes of brilliant rugby as ranked by Canal+ TV station in France.

We used to post these clips far more regularly in the past but that is often reliant on contributions from users, so when that dries up, so do the videos. As has been mentioned many times, if you’re in a position to help out with these type of videos, please do get in touch or submit links to them and we’ll share.

As always the Top Ten nature of these are subjective and probably shouldnt be looked at as 1 to 10 but rather just ten of the best. That said, the try that Toulouse scored that comes in at number one is absolutely outstanding overall.

David Smith of Toulon started and finished an excellent try against Stade Francais, while Felipe Contepomi created a piece of magic himself, that time against Clermont. The Bordeax-Begles try, scored by none other than a front rower, will definitely go down as a team try of the season.

As always, the commentary adds to the occasion and the crowds in France, particularly in the build up for that Jauzion try, make the Top 14 fascinating and incredibly exciting to watch at times.

If you have any other requests, suggestions, or contributions because you watch Top 14 regularly, don’t be shy to get in touch. We’ll have more great clips from the Top 14 in the next few days.