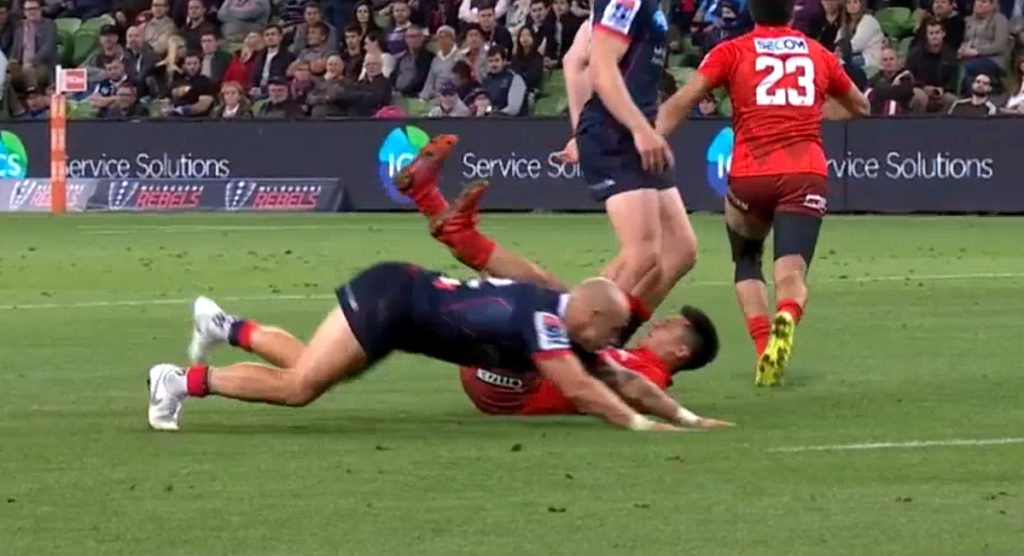 Billy Meakes has been cited (*UPDATE below) for this thumping tackle on Sunwolves back Jason Emery during the Melbourne Rebels’ 42-15 win against the Japanese based side on Saturday. The centre will face a judicial hearing after there was no punishment on the field at the time of the incident.

Former Gloucester centre Meakes flew into Emery, hitting him around chest height but allegedly sliding up and making contact with the head. Referee Nick Berry asked his TMO to have a quick look and the officials felt there was no further punishment needed at the time.

The Rebels actually scored a try seconds later, so the officials must have been certain the tackle was okay.

After initial consideration by the SANZAAR Foul Play Review Committee, he will have to appear before a SANZAAR Judicial Committee Hearing.

Meakes reportedly told Fox Sports post match that he didn’t think there was anything wrong with the tackle. We will likely find out later today if he gets suspended or not. What do you think of it?

Meakes has been issued an official Warning after it was found that he was guilty, but it did not meet the Red Card threshold.

“On review of footage not available to the citing commissioner, it was clear the initial point of contact was below the shoulder line with use of the arms in an attempted wrap.  The player’s shoulder rose up post the initial contact and may have contacted the neck of the tackled player although footage was inconclusive. There was no evidence of contact with the head of the tackled player. The citing was warranted on the evidence available to the Citing Commissioner but with the further evidence (including additional footage, player evidence and medical evidence) contact above the shoulder line was not able to be clearly demonstrated.  The action of the Player in tackling a vulnerable opponent at the shoulder lineand rising up was dangerous and as a result a Warning would be issued to the Player (under Rule 8.5).”

“The player is free to resume playing immediately.”