Bjorn Basson's great try against the Cheetahs at Loftus Versfeld 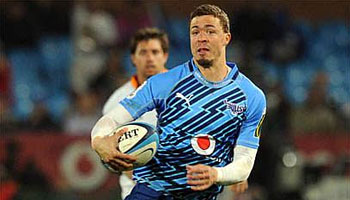 Bulls flyer Bjorn Basson scored one of the tries of the weekend on Saturday as the Bulls beat the Cheetahs 40-24 with a first half demolition that stunned the visitors. There were ten tries scored in total by the end, but here is a quick look at one of the best.

Just under 30 000 fans watched the Bulls dominate with a powerful first half performance, achieving a bonus point before halftime as they scored four tries and led 26-0 at the break.

Morne Steyn, who hasn’t been kicking well in Test rugby of late, found his form again, kicking five conversions and in the process going past the 200 point mark for Super Rugby this season.

Bjorn Basson’s try, as featured below, came from a turnover and a lovely piece of quick hands by JJ Engelbrecht, which allowed the former Griquas speedster to stand up the defence, who were down to 14 following the yellow card dismissal of Andries Strauss for, believe it or not, hair pulling.

With the home side leading 40-0, wholesale changes were made which disrupted things as the Cheetahs came back into the match, scoring a four try bonus point in just twenty minutes.

Willie le Roux and Heinrich Brussow both scored great tries during that period, which you can view in the match highlights, but this one from Basson was the standout from the match, and showed what can be done when a player has genuine pace, and great balance.