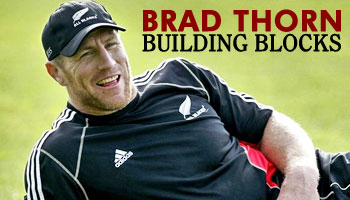 This weekend Brad Thorn lines up for New Zealand against a country he used to call home, Australia. The 36 year old will retire from the All Blacks after the World Cup, heading straight to Japan. Today we’ve got a fantastic personal insight into the training regime of a guy who has had to work harder than most to get to where he is today.

Not everyone is blessed with bundles of energy and extreme work ethic. Thorn, who has achieved in both codes, is now a veteran of 57 tests for New Zealand and admits that life wasn’t all plain sailing in his early days. He was, as he describes it, a lazy kid.

In this two part feature filmed in the lead up to the Rugby World Cup, Thorn discusses the personal and physical battles he had to face as a teenager, and the moments that led to him applying himself.

“I wouldn’t he here today if my dad hadn’t cared about me enough to give me a kick up the backside,” Brad says of his father’s timely intervention, which led to success on the playing field.

He is now verging on the pinnacle of a great career, and was happy to document his work ethic in the gym, as well as the forest he used to run through as a kid in Brisbane. He has apparently never discussed or shown that forest to anyone, let alone had it documented on camera. A staunch family man, Brad says he’s touched that his kids will have a record of the hard work he’s put in, something for them to watch when they grow up.

The resounding message from Thorn is that the work ethic he has now didn’t come by luck or chance, but simply by making the decision to apply oneself. He hopes that the videos will help inspire youngsters to push through, despite possibly having a natural inclination to be lazy.

There are two parts below, the second of which can be viewed seperately, or not at all. It’s more targeted towards the gym work, as we get to witness his intense routine first hand, something that he’s mastered over the years. Robbie Fruean and Kieran Read watch on. Enjoy.