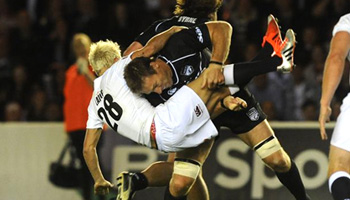 Amongst all the excitement of World Cup warm up matches, on Friday night a mixed celebrity and players England XV took on a mixed World XV in the inaugural Rugby Aid fixture. The match was to benefit the Rugby Aid charity, people who work alongside returning servicemen and women to help adjust back to civilian life after conflict.

Mike Tindall led the England XV, alongside a list of rugby greats, including Simon Shaw, playing against such greats as Shane Byrne, AJ Venter and Justin Marshall.

The game was played in very good nature, with professionals lining up alongside ex-footballers, dancers and even a World’s Strongest Man competitor. Hit of the game however went to Brad Thorn, as shown in the video below.

Although it crosses the line to a yellow card, both Thorn and Made in Chelsea star Jamie Laing saw the funny side of it. The smallest player on the field made the error of running sideways, and was cut off brutally by a hit from a man over double his weight, rotating and landing heavily on his back. Thorn was quick to apologise, and shared a joke with Laing as he jogged off the field to pantomime villain booing.

There was no intent or malice in the hit, instinct took over and the sheer force of a cross-code southern hemisphere warhorse vs a dainty reality TV star was too much to handle!

“This is the price you pay for putting your body on the line for England Rugby… Loved every moment #crackedribs #stillplayedon” Laing later tweeted.

Taking on professionals rarely ends well… Remember this clip from 2000 showing what happened when two Jackass stars joined in on a London Irish training session?

Relive some of the biggest hits from #RugbyAid including a rib cracking tackle between Brad Thorn and @JamieLaing_UK. http://t.co/o6DXmQgguo

A quick big hits recap, thanks to BT Sport