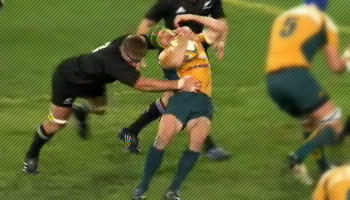 All Blacks lock Brad Thorn was again in hot water as he was sent from the field in the fifth minute of the classic match between the Wallabies and the All Blacks on Saturday, in which the Wallabies came out victors 34-19.

Thorn’s lazy high tackle on the darting Matt Giteau was enough for referee Craig Joubert to produce the yellow early on in the game, despite no previous warnings.

It was a careless stiff arm that was more out of reflex than malice, but referee’s don’t like big locks touching key flyhalfs. Just ask Jannes Labuschagne about his red card in 2002.

Giteau landed the resultant penalty without any problems, but the attack, that looked dangerous, was stopped as a result of the tackle, possibly adding to Joubert’s assessment of it.

It was Thorn’s second yellow card of the season, after he was sin-binned in the Super 14 final, and follows his one-match Tri-Nations ban after being cited for the Smit tackle in Wellington.

Under Sanzar rules, three yellow cards in one season of Super 14 and Tri-Nations leads to a tribunal hearing and a possible further suspension.

Talk of Thorn being a dirty player has been quashed by Wallaby coach Robbie Deans though, who’s spent a lot of time with the second rower in the past.

“In terms of his mentality he is not a dirty player, but these things happen.”

“He plays a physical game, and tonight a guy stepped back inside him and he reacted to that and got him across the shoulder. I don’t think we can say he’s got a discipline problem.”

Was a yellow card harsh so early in the game, with no previous talkings too? Or was it fully deserved, as Matt Giteau playing without a head wouldn’t be quite as good as him playing with one. Thoughts?