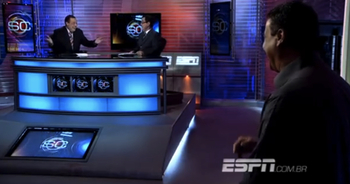 As the Rio Olympics approaches, fans the world over are counting down until Rugby makes its long-awaited return, kicking off on August 6th. However it is a shame for those outside of Brazil that they won’t be able to sample the hosting of ESPN Brasil’s presenters.

We’re huge fans of the colourful characters that analyse the game on our TV screens, with our friends at Fox Sports Australia in particular proving big hits throughout the years with their Plays of the Week and Top 5 compilations.

Well, it appears that ESPN Brasil may have a duo to rival Sean Maloney et al.

Antero Greco and Paulo Soares are the hosts of SportsCenter, and in this clip from 2013 they are discussing an upcoming game between France and New Zealand with the channel’s commentator, Antonio Martoni.

Martoni concludes his preview of the game by mentioning France’s number 8, Louis Picamoles.

The monstrous Picamoles is used to striking fear into his opponents by the sound of his name alone. However, in this instance, his name causes uncontrollable laughter amongst the hosts.

Martoni laughs before he’s even said it, while Soares in particular is rendered helpless by the mention of the burly forward.

The video is of course in Portuguese, but that shouldn’t detract from watching three professionals laughing at a name that in their native tongue isn’t, shall we say, TV-appropriate.

It turns out that in Portuguese the phrase ‘Picha Mole’ means something like, ‘limp dick’.

Yes they’re adults and should probably be more professional, but boys will be boys.