Brian Lima knocks himself out with crunching hit - 1997 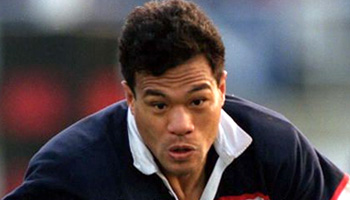 As we sort through the best clips of the past weekend, we pause to take a look back to a sickening collision from the Super 12, in approximately 1997.

It was Auckland against the Gauteng Lions (as they were known back then), and we get to see one of the hardest hitters in the games history in action.

While Samoan Brian Lima was always known for his uncompromising tackling style, there were a few blotches in his career as the killer hits sometimes drifted a little too high.

In the 2007 World Cup he famously knocked himself out when going a little too high on Andre Pretorious. Much debate always follows regarding the legality of some of the hits. Many love them, while others write them off as downright dirty.

In this clip though, all those years back, we see a fairly similar incident as a young and fearless Lima launches into Gauteng fullback Dawie Du Toit, knocking himself out cold on impact.

It was a crunching hit, with a sickening noise and unfortunate result. As we all know though, Lima recovered, going on to make quite a name for himself with his robust style of play, and more than a few spectacular hits throughout his career.