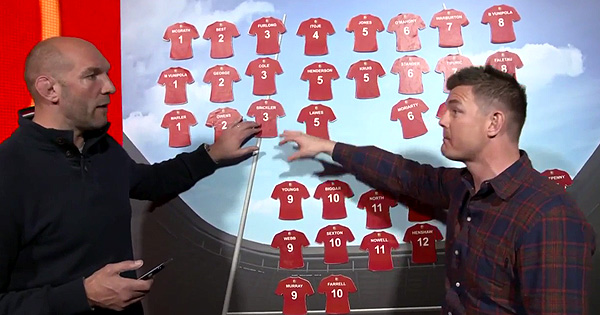 There has been plenty of reaction from Lions fans and opponents alike on the squad selected by head coach Warren Gatland on Wednesday. Whether for good or for bad, it has generated a debate that will rage on until the first game of the 10-match tour down under.

BT Sport’s Lions veterans Ben Kay and Brian O’Driscoll provided an ex-player’s perspective on the wider squad, and discussed some of the notable inclusions and omissions.

Much of the discussion has focused on England captain Dylan Hartley, who was overlooked in favour of his understudy Jamie George. The Saracens hooker joins Welshman Ken Owens and Ireland captain Rory Best on tour.

There was also some discontent among Scotland fans after another low contingent was selected. Flanker Hamish Watson, who showed so well in the 6 Nations was the notable exclusion as was fly-half Finn Russell who had been tipped by many to be a wildcard inclusion.

The latter’s position went to Dan Biggar who Gatland knows well from the Wales setup. In fact, despite finishing 5th in the 6 Nations, Gatland decided to stick to familiarity by picking 12 Welsh players, only four short of the largest contingent England.

Ireland’s Robbie Henshaw was rewarded for his stand-out season last year with a debut Lions tour while centre counterpart Gary Ringrose was unfortunate to miss out. Lions stalwart Jamie Roberts also missed the cut while England’s Jonathan Joseph will travel to New Zealand despite rumours suggesting he too would miss out.

While Gatland’s 41-man squad is the largest since Clive Woodward’s from 2005 (also in New Zealand), there will still be opportunities for those who didn’t make the cut to come in as injury cover on what is sure to be another brutal Lions tour.