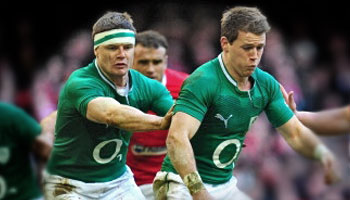 Brian O’Driscoll is fast becoming the bookies favourite to captain the Lions on their tour to Australia following Ireland’s 30-22 victory over Wales on Saturday. Young winger Craig Gilroy, who also looks to be a star, could be joining him down under.

There was somewhat of a subplot to the Ireland win as O’Driscoll put in yet another Man of the Match performance, impressing fans and experts alike, and raising serious suggestions that he may now be a real contender for the captaincy role on the British & Irish Lions tour of Australia.

The 34-year-old set up a Simon Zebo try with a perfectly timed pass, and scored one of his own. He was typically bullish throughout, typified by the hit we see briefly below, where he took on big Ian Evans as Wales launched a full on assault on the tryline.

Sam Warburton and Chris Robshaw are the other two players in contention for Lions skipper honours, but if fit and playing well, O’Driscoll’s experience would surely count in his favour.

“The big thing is trying to be fit and getting as close to 100 per cent fit as you possibly can when you take to the pitch,” he said post match.

“I felt good against Wales, my ankles both felt good, as did all the other bumps and bruises. If you can start games that way you have every chance of putting in a half decent performance.”

Craig Gilroy, who has had a good start to Test rugby, made a great hit on Alex Cuthbert just a minute after O’Driscoll’s on Evans. Snubbing out the Wales overlap being the key element in it.

“It was a very physical game, real Six Nations stuff which you expect when you come to Cardiff.

“It was body-on-the-line stuff and there was a couple of times when guys made key decisions, stopping the ball when they had two or three men overlaps and that’s what you have to do to win tough games,” O’Driscoll added.

Who would you pick as captain for the Lions this year?