British and Irish Lions fans arriving in Australia by the thousands 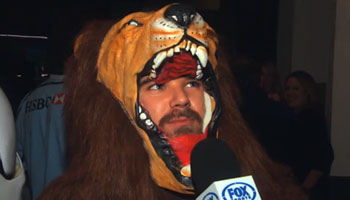 British and Irish Lions fans have been flocking to Australia for the series, and of course the first Test which takes place in Brisbane this weekend. Fox Sports’ Sean Maloney caught up with a whole lot of them in Sydney ahead of the clash with the Waratahs.

Thousands of fans are expected at the opening Test at Suncorp Stadium on Saturday, aiming to replicate some of the famous scenes from the Gabba in 2001.

“At that level you never really get intimidated by a crowd, but it was such a massive shock to see the crowd that night,” says former Wallaby Daniel Herbert, who played 12 years ago.

“Nothing prepared us for that sea of red. To be enveloped by noise from the other team’s supporters was like nothing I had ever seen before. It lifted the Lions to a whole new level.”

Fellow centre Tim Horan has said that they need the Wallaby supporters to lift their game and do what they can to drown out the vocal travelling Lions.

“Colour is the key. The Lions taught us that in 2001,” said the 1999 World Cup winner. “We need our fans to wear as much gold as they can and stand shoulder to shoulder to support our boys.”

The Australian Rugby Union have advised fans to wear green and gold clothing, and they are also giving away 15 000 gold hunting caps on the night. Impromptu renditions of Waltzing Matilda are also expected in an attempt to silence the passionate Lions fans, who will no doubt account for more than just the 8000 allotted tickets in the 52 000 seater stadium.